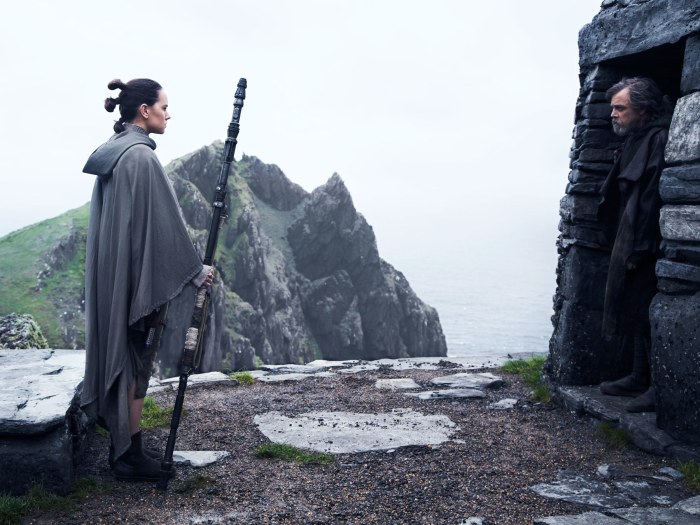 I’d just like to take this moment to say I liked The Force Awakens.

Look, I understand why some people don’t. Does it follow all the beats of A New Hope? Yes. Is A New Hope based on the archetypal Hero’s Journey? Yes. Were people going to be mad if the new Star Wars trilogy was wildly different from the original trilogy, like, say, the hated prequels? Yes. And do I have a bunch of nostalgia and fierce opinions about a movie made twenty two years before I was born? Actually, no.

This is a spoiler review, because you’ve probably already seen The Last Jedi and/or been on the internet.

One of the best things about this new trilogy are the characters, who have certain characteristics of the classic characters, but also have their differences. This movie defines these differences even more.

Rey is closest to Luke, but doesn’t have a royal legacy to live up to. She’s a nobody, and she has to grapple with that and what it means for The Force to have chosen her as the response to Kylo Ren.

Kylo Ren wants to be like Darth Vader, but for wildly different reasons. And he’s not going to get the redemption arc many thought he was. He has to pay for his actions.

Poe is a blend of Han Solo and Leia, and Finn is not Lando Calrissian. I think The Force Awakens needed to be like A New Hope in order to establish these characters so they could work in this film.

The problem is that new characters are added, and as interesting as they are, they are spread too thin, making it so no one gets a fair shake, and people disappear for large chunks of the film. With three somewhat equal plots and a handful of mini-ones, The Last Jedi takes pains to expand the world of Star Wars. It is clear director Rian Johnson was bursting with ideas. However, I think there are also some weak parts. He tries to take on three plots, along with small mini-ones, and I think all he needed was an editor with a strong pen saying, “This is great, Rian, but let’s leave some of this for the next movie or the deleted scenes. This film is two and a half hours, and we really don’t need to see Luke milk a beached loch-ness monster just for a blue-milk callback.”

As for the plots, though, I like the messages of Rose and Finn’s Canto Bright casino adventure. Star Wars is clearly making a small effort to say something nuanced about politics- people profiteering off both sides of the war and animal cruelty is wrong- but I don’t know if taking away so much time from the rest of the characters was worth it. Rose and Finn are legitimate characters (not tokenism) but their plot could be eliminated. Same for Holdo and Poe. I love that Holdo is such an antithesis to what we would expect, middle-aged woman in a ballgown as a military leader, who gets an amazing payoff, but again, not sure if it was worth taking away attention from the film at large. Some consolidating could be made to keep the film from spreading itself so thin and having multiple endings.

The most interesting plot to me was the Kylo and Rey plot. Not only is The Force-head-texting thing new, but it seemed like Johnson read all the fan theories online about the characters and said, Nope! Yet it doesn’t feel like he’s checking boxes. It seems like he’s trying to set the characters on course for a continuation of their arcs, and with the characters literally struggling against each other, gives a visual metaphor to the thematic struggle presented here.

Things people have disliked about the film that I didn’t mind- I was fine with changes to Luke’s character, and I think the parallels to the original trilogy are needed to remind you it’s the same series, and the Star Wars movies have always been based in archetypes. These aren’t new.

For all that is packed into The Last Jedi, the film doesn’t actually end very far from where it started. The resistance fighters are still scrappy and in bad shape, Rey is still figuring out her powers, and another mentor figure is gone. This shows how the Star Wars movies are never going to die, though- if they can do so much while moving forward so little, they will live on for eternity.

You’re always going to have people who are unhappy with change, want complete change, or are unhappy with the particular way you brought change. That isn’t to say criticism isn’t good (that’s kind of my whole thing). But personally, I’m not a Star Wars baby. I have no nostalgia for the original or prequels. I’m just here for the ride and the cultural conversation. I like the new Stars Wars. I like how it has made an effort towards diversity and representation, giving women a bigger role in sci-fi then they’ve ever been allowed, changed franchise filmmaking, and the themes and ideas that are being presented. I also respect the original foundations, but I don’t think that means they are the golden standard.

I think the best path for Star Wars is to do the same. You can’t please everyone, so do what you want. The Last Jedi does what it wants, and I think with a little fine tuning, this is what makes it a strong film and a steady path for the future.

One thought on “You Can’t Please Everyone: The Last Jedi”