Dancing through life/ skimming the surface/ gliding where turf is smooth/ Life’s more painless/ for the brainless – “Dancing Through Life” from the musical “Wicked.” 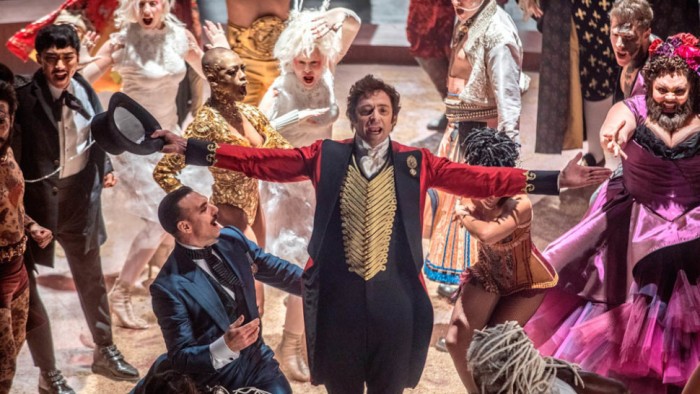 The Ringling Brothers and Barnum & Bailey Circus are closed down. Fact.

A lot of people enjoy the circus. Fact.

The circus has a long and troubled history of animal abuse allegations and other ethical violations. Fact.

P.T. Barnum was not the inventor of the circus but widely developed it and was a “self-made man.” Fact.

Barnum was a charming man who advocated for the rights of the downtrodden and outcast and was a progressive social thinker. Fa-hmmmmmmm. Time for a musical number! And a one, two, three, four-

The Greatest Showman is from first-time director Michael Gracey and the passion project of Hugh Jackman. It’s a full swing original pop-musical, so get with it or get out. It’s full of clever choreography, likeable actors with earnest performances, beautiful sets and costumes, and a story that hits all the beats of a tidy rags-to-riches. It’s here to entrance you with magic and wonder. If you want the real P.T. Barnum, you’ll get a glimpse of him, but some of his rougher edges are mysteriously scrubbed away. Here, Barnum is carried by the earnest Jackman, whose Barnum is a business-minded, occasionally dishonest but gold-hearted, family man who identifies with all the outcasts he’s using in his show.

But, even if you don’t know anything about Barnum, there is still a sense in the movie that a lot is being left out, which it is. For example, you aren’t going to see the story of P.T. Barnum’s first real act, which was to buy Joice Heth, an elderly slave, advertise her as the 161 year old nurse of George Washington, and perform a public autopsy on her. I guess Hugh Jackman wasn’t down for that?

The Greatest Showman says it’s telling the story of P.T. Barnum, but it really wants to tell the story of how the circus is a haven for outcasts and misfits, a place for them to find a family. It’s not historically accurate, but you probably knew that you aren’t here for a history lesson, you’re here for musical numbers with Zac Efron and Zendaya! And that is legitimate and a fine indicator of a good time.

The music, penned by Justin Paul and Benj Pasek from La La Land, is fun and light. The choreography is enchanting and creative, with the cast using the settings around them as musical instruments and props during the performances, and it is an unapologetic musical. People just pop into songs. Director Gracey has a background in music videos, and it shows.

If you want a musical, you’re going to get a fun musical. But if you’d like a musical with a bit of thematic depth, I don’t think you’ll get it.

The selling point of the movie, the big theme and the subject of its many anthems, is being an outcast and being yourself. Ignoring, probably, the real P.T. Barnum’s motives, here, everyone is an outcast in some way, trying to fit in. Barnum gives them the chance to be seen and loved. The film really wants to say interesting things and hit on tough subjects- racism, marital infidelity, the dangers of show business on families- but it only does that in a very shallow way. That includes its own theme.

The problem with saying that everyone faces adversity is that yes, the central problem is the sin that all humans have of categorizing people and hurting each other. But some oppression is systemic and institutional. So, Barnum’s desire to be respected by his wife’s wealthy parents can’t really be equated with the struggle of the black characters in the film. Barnum can escape the adversary facing him. They cannot.

Furthermore, you don’t get to know the “freaks” very well. Some of them are given little introductions, but the majority are not. Because we don’t get to know these “freaks,” they don’t get any humanity outside of, “they are rejected by society.” This reduces them to what the movie wants to say the circus freed them from being- nameless freaks.

I went in wanting an entertaining musical, and I got one. I had a blast watching it. I’ve been listening to the soundtrack. I’d probably see it again. If you want to see an original musical, this is the only one being offered up this year, so go have a great time!

But I really don’t think it is too much to ask for some themes in a movie, or at least a message or interesting thought to chew on. Especially with a story like this, that has multiple routes to take. But The Greatest Showman is not willing to give me something beyond what I can find from Katy Perry’s Roar.

And that’s the real shame, because this movie tries to encourage people to be honest and fearless, but can’t find any strength to do that itself.

One thought on ““Dancing Through (A) Life”: The Greatest Showman”