Dora and the Lost City of Gold

The main issue with the new live-action Dora film is that it has an identity crisis: is it a movie version of the show, or is it a meta-commentary of the show, updated for an older audience?

The film chooses to do both, to its detriment. There will be scenes where characters say something like, “Silly Dora, maps don’t talk,” or will make fun of Dora for speaking to the audience. But in the next scene, Boots the Monkey will talk, or something else magical will happen. Making fun of the central concept of the show is disrespectful because it not only insults its audience but also because the show is very good at what it does and is quality children’s entertainment. The movie ends up aiming young, so the meta-commentary isn’t even clever enough for fourteen-year-old edgelords. So if it’s not for older audiences, and it’s disrespectful to the young kids who watch the show, who is it for? The film never answers this question.

But on the positive side, Isabela Moner is charming as Dora, taking the role seriously but with a twinkle in her eye, and is able to sell most of the antics and jokes. Michael Pena and Eva Longoria are lovely as her parents, and I found it refreshing to have two (living) parents who are shown to be deeply loving and respected, and even when they need to be saved by Dora, they are never made the butt of the joke.

The entire Latinx cast is game and most are good, although sometimes they struggle with nailing the inconsistent tone. Jeff Wahlberg as Diego is the weakest link, and because there are too many characters, his traits are made nearly interchangeable with the other classmates on Dora’s trip, and a bafflingly unnecessary and dull “romance” doesn’t do him any favors.

There were times I was a little bored, which made the hour and a half feel like two, but the young girl next to me was loving it. When Dora asks the audience in a fourth-wall break, “can you say neurotoxicity?” the girl very solemnly said out loud, “I can’t say that.” That was enough to charm me, and this movie is almost as charming.

Blinded By the Light 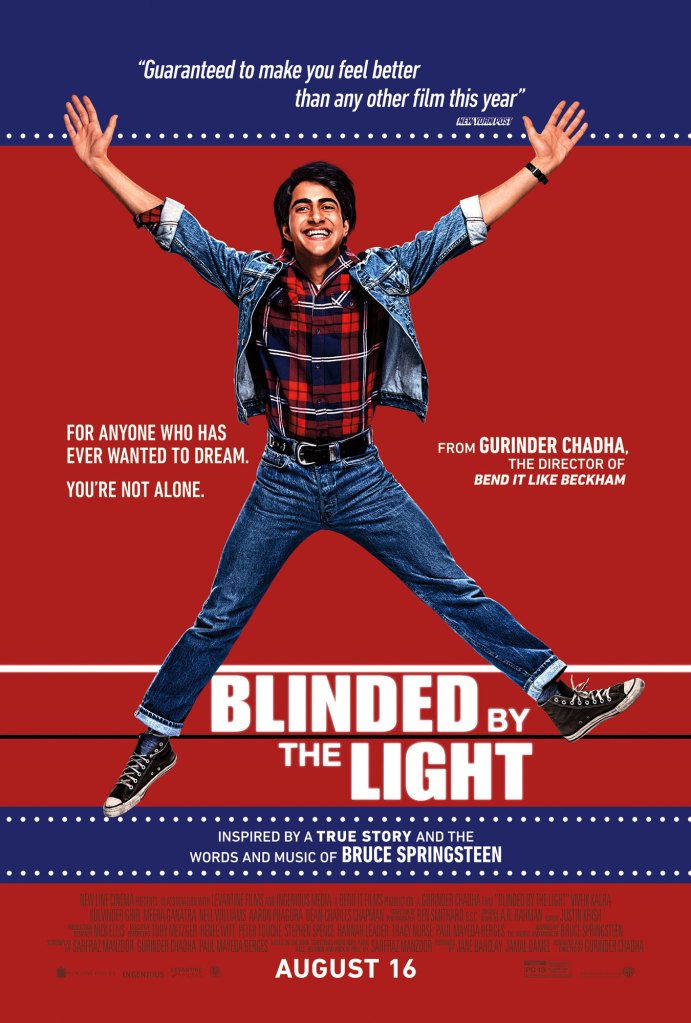 Blinded By the Light’s trailers do this film a great disservice. Whether you’ve seen the trailer a couple dozen times like my family has, or just once, the impression you’re likely given is, “It’s a feel good movie.” And while that isn’t bad within itself, the feel-good genre is predictable and can be a little stale, and a Pakistani boy from Thatcher’s Britain realizing his artistic dreams because of Bruce Springsteen had plenty of opportunities to be that.

But Blinded By the Light, directed by Bend It Like Beckham’s Gurinder Chadha and based on the book by Sarfraz Manzoor, is not that. Yes, it may make you feel good, but it’s got some other things to say. For one thing, while it’s certainly in-love with Bruce Springsteen, it’s much more of a love letter to any pop culture that we use to communicate to others. We’ve all been in a place where we are able to relate to someone simply through our shared interests. When we aren’t able to say something straight, we may say it in the language of our favorite movie or musician or book, and usually we do that because that piece of media spoke deeply to us first.

The film also has something more thoughtful to say about following your dreams them, “screw your family and do it.” It, like The Farewell, wrestles with the complications that come with being at the crossroads of collective vs individualist cultures, and reveals truths about both. Then it interprets Springsteen’s work into something universal and complex enough to speak to both cultures.

Something not touched upon in the trailers that is present in the movie is the racism faced by the Pakistani characters. This racism was true of the time period but also looks a lot like racism around the world today. Further, Blinded By the Light, albeit very loosely, questions what it is like to be a person in an oppressed minority group who uses pop culture to escape the daily pressures of such oppression, yet that exact pop culture is made by someone from the dominant group that oppresses you. However, despite all of the difficulties endured by the characters in this film, it also has moments of uplifting hope and humor and whimsy that reminds us of the holistic lives of the characters.

I walked away from Blinded By the Light with an appreciation for The Boss, a Springsteen in my step, and something to think about.

One thought on “Double Feature: Dora and the Lost City of Gold + Blinded By the Light”