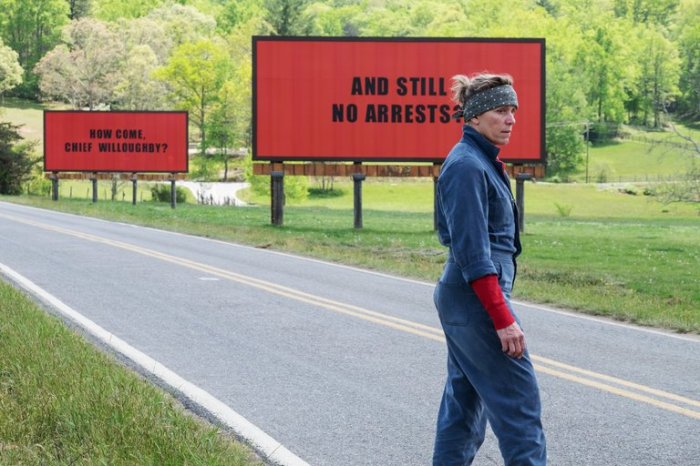 Martin McDonagh’s (In Bruges) Three Billboards Outside Ebbing, Missouri is a story about angry, grief-stricken Mildred Hayes (Frances McDormand). Her daughter Angela was murdered, and the police have seemingly dropped the case. The officers on the case are Chief Willoughby (Woody Harrelson) and Officer Dixon (Sam Rockwell). Willoughby is a well-meaning cop, dying of cancer, and Dixon is a dumb, racist, temperamental, corrupt cop. Mildred rents out three billboards that send a loud and clear message:

-And still no arrests?

This film has been getting critical acclaim and is leading the awards season, so I would like to raise three billboards of my own:

The biggest criticism of Three Billboards has been its treatment of race. Several people throughout the film explain that Dixon is racist and has a history of torturing the people of color in Ebbing. He uses the n-word, makes threats, and this is all used to establish him as a terrible man. Our (good?) police chief, Willoughby, explains not-so-helpfully why he keeps him on the force- “”You get rid of every cop with vaguely racist leanings, you’d have three cops left and all of them would hate the f-gs.”

Once Dixon needs to be redeemed through, his racism, which he never shows remorse for or makes efforts to change, is completely forgotten about. It’s treated, as Insider’s Jacob Shamsian notes, as “a character quirk.”

I don’t doubt that there are cops who feel this way, and it’s not that a movie that is supposedly about redemption and empathy and human complexity can’t redeem a despicable person. That’s what I believe we have to do in real life. But the redemptive arc for Dixon is shallow, unfulfilled, and he never seems remorseful. Discussing institutional racism in your movie is an admirable thing to do if you’re going to treat it with weight and actually have thoughts about it. But British director McDonagh is much more interested in throwing sensitive topics around as coloring to his black-and-white sketch of what he believes is middle-America, and it’s utterly unconvincing and disgustingly manipulative.

Another example- Mildred’s black friend, Denise (Amanda Warren), is arrested by Dixon to spite Mildred, and she isn’t released until the end of the film, and this is… cool with everyone? Not talked about? That’s not a commentary on racism, that’s terrible writing and using black characters for the advancement of white ones.

In my screenwriting class, my teacher tells us to make sure every scene has conflict, but that doesn’t mean “every scene has to have a screaming match.” Three Billboards is very much ready to have a screaming match, or an explosion, torture, domestic abuse, burning someone alive, or horrific beating in every scene. Almost every single scene escalates to 100, leaving no room to breathe or think. Frances McDormand and Sam Rockwell and Woody Harrelson do a fine job with their roles, but all of the things they are asked to do are so actor-y, so unnatural, and so over-the-top that I honestly don’t think they should have been nominated at all. I never had to read Frances McDormand’s face to figure out what she was feeling, she was either saying it or destroying something.

I recently watched Spike Lee’s Do the Right Thing. It’s a masterpiece, and it also deals with the escalation of anger. It and Three Billboards are very different films, but what Do the Right Thing does that Three Billboards doesn’t do is spend the majority of the film building characters and setting up the tension, before making the violence climax and thus actually hurt. Watching the riot in that film feels like a gut punch. Three Billboards is constantly pummeling me, so nothing feels like anything after a while.

I never felt like any of the characters were real. I could not imagine any of the characters in situations beyond the ones they were in. I suppose that this could be interpreted as a hyper-reality, like the film is becoming what grief and anger feels like. But it’s not presented that way. This is portrayed as a story where someone really does all of these things.

It’s a film being billed as a movie for our divided times. But as I see it, it’s a harmful one. It tells you your anger is justified. And true, a lot of anger is, and Mildred’s certainly is. But there are no repercussions for the actions she or Dixon takes because of their anger. They suffer indirectly- Mildred is still miserable and Dixon gets burned because of Mildred’s attack on the police station, but they are never punished for their actions. They never see repercussions. They are the only ones that affect each other, even though their villainous acts affect everyone else.

Anger isn’t the problem, it’s what you do with it, and all the characters in the film act in an evil way with it, and those actions are excused. Telling people they can be angry and do whatever they want with that anger is a dangerous message. Three Billboards isn’t just a movie about mean people. It’s a mean movie, one that wants to say a lot of important things but doesn’t have the heart to actually finish the job.