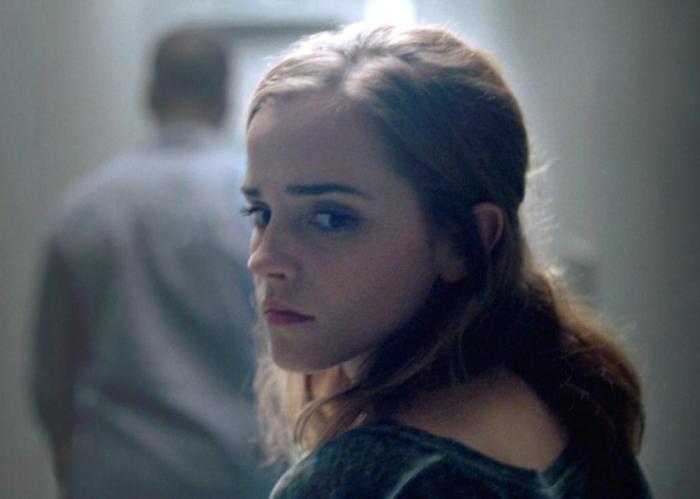 Oversharing, the need to tell everyone of your every action, the ability to find anyone if you have the right resources, a camera with you at all times- that’s how technology works for many people now. If not now, maybe in a few years.

Mae Holland (Emma Watson) plunges into the world of that technology when she lands a job at The Circle, a Google-meets-Facebook mega company led by Steve Jobs-y Eamon Bailey (Tom Hanks). When a series of events makes Mae decide to go “transparent” (wearing a camera on her at all times) she learns firsthand the consequences of being watched and analyzed with every move.

60% of The Circle is either Tom Hanks or Emma Watson giving Ted Talks about the future of technology. They stand on stage and talk about what The Circle will be doing next. If that sounds like fun to you, this may be your movie. If this sounds a little less like the exciting, thought-provoking drama you were hoping for, then you’re right. While both of these actors have the charisma to pull it off, getting long-winded explanations of exposition can be tedious, and sometimes they can’t even overcome the thesis-like script.

Now speaking of the actors, Emma Watson is the foundation of this film. She leads and keeps it, and for the most part, does an excellent job. She is very natural and is able to hold our attention. If you’re here for any other actor, though, you’ll be disappointed. John Boyega, Tom Hanks, Patton Oswalt, and Karen Gillian are all very, very supporting. Which is a shame, because they all do a great job. One small thing though- let John Boyega speak in his natural British accent. Please. He’s been forced to do an American one, and it sounds like Benedict Cumberbatch’s accent in Doctor Strange. And I don’t mean it in a good way. He sounds like he has a cold. Give him a tissue. And more lines.

On the technical side, we are used to studio movies being competently filmed and edited. It’s just a given that the cinematography, score, technical aspects of the film will be good. And for the most part, The Circle is a slick film. But the editing here is really odd in parts. The camera breaks the 180 degree camera rule. There is a scene where two characters, side by side in separate bathroom stalls, are filmed at the exact same angle, so when it switches back and forth, it just looks like the actresses are teleporting and/or the editor is making extreme jump cuts. It takes you out of the film, and makes it look amateurish.

Emma Watson’s Mae seems to represent the biggest failing of the script. She is a very reactive protagonist, one that simply reacts to the incidents around her, and then goes back to her natural disposition. That makes her turn to “the dark side,” not a surprising one, and not one that seems earned. If at the beginning of the film, she had been presented the opportunity to turn, considering her lack of development, I would assume she would have. Therefore, there is no conflict. There is no real antagonist, or resistance by anyone or anything. This film just presents the spiral into complacency as a natural one. While it shows the horrors of a future like the one presented here, if our likeable protagonist can get behind it, and nobody else seems to have a problem with it, then is it really bad? The film doesn’t have a stance on it.

So are we, the audience members, supposed to be the protagonist? Are we supposed to see this cautionary tale and the characters within it and decide whether it is right or wrong? Maybe. The pros and cons of each side are listed out, in essay fashion. But with no strong emotions in play here, the story, despite its relevance, feels unimportant. Lackluster. Not something to worry about dwelling on. It is almost like director and co-screenwriter James Ponsoldt (The Spectacular Now) thought, hmm, maybe if I make the end ambiguous and all the characters flat, and I don’t make a compelling case for or against either side, they’ll assume I’m really smart!

So, there is where it ultimately fails. I can forgive it for its odd editing, poor use of Tom Hanks and John Boyega, and sloppy character development and exposition. But I cannot forgive it for being dull about its interesting premise. How did you mess this up? Everything was in your favor!