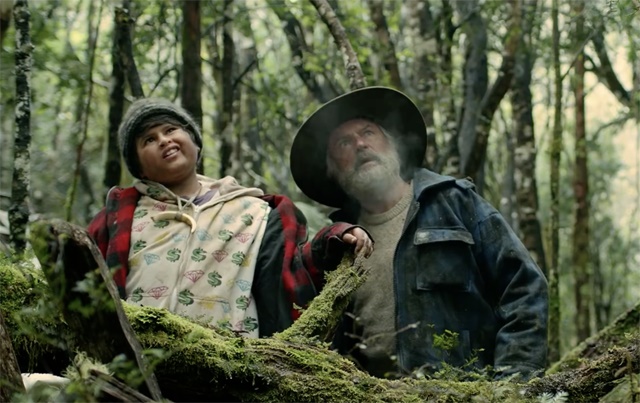 Welcome Taika Waititi, to a place in my heart. It’s a space you’ll have to share with my family, chocolate, the Lord of the Rings, and soft blankets, but I’m sure you’ll find room.

Hunt for the Wilderpeople is the native New Zealander’s fourth feature film after Eagle vs. Shark, Boy, and What We Do In The Shadows. Hunt for the Wilderpeople is based on a book by Barry Crump. The film is about a young foster boy named Ricky Baker (a fantastic Julian Dennison) whose last chance at a foster-home before being thrown in Juvie is an older couple, Bella (Rima Te Wiata) and Hector (Sam Neill). Bella is excited and inviting, full of positivity and charm. Hector is, well, not as excited, but doesn’t bother Bella or Ricky, so everyone is happy. Ricky begins to love his home, until tragedy strikes, and he and Hector find themselves in the bush, running for their lives as a massive manhunt tries to find them.

Wilderpeople takes cliches (fat city kid, grumpy old geezer, road trip that leads to bonding) and twists them just enough that they work. The city kid, Ricky, is a lovable protagonist, who is a bit off-putting, but wants a family, and will fiercely protect the one he gets. The grumpy old geezer is a man with heart, who is tough but not unwilling to learn, and in the end, makes the right decisions.

None of the characters are a complete subversion of the trope (characters like the social worker and incompetent police officer don’t get the above treatment at all), but there is still thoughtfulness to all of them that should be appreciated. All the performances are great, with Neill and Dennison as standouts with good chemistry.

Maybe the best thing about this film is the humor. My family and I laughed out loud several times. Not just chuckles, but belly laughs. The film is completely secure in its ability. It doesn’t turn its head and look at you for approval or acknowledgment, it keeps on trucking along in a mix of deadpan, slapstick, and exaggeration, with complete confidence. The scene with a cameo by Waititi is worth the ticket price alone.

It must be really nice to work in New Zealand. You get actors with amazing accents, breathtaking settings, Weta Workshop is nearby, and it’s full of Middle Earth goodness. Waititi makes good use of all of these things. The film is sprinkled with screensaver-worthy shots, a sense of magic grounded in a real world, and lovely accents. There aren’t many special effects, but one sequence in particular makes good use of a CGI wildebeest. The film also makes incredible use of its score. From indigenous music in a sweeping opening shot to more modern fare, I was moved to look up the soundtrack after seeing the film.

It’s worth mentioning that the film stumbles near the end. It has to make the decision to be realistic or to go in a more whimsical direction. It decides to go halfway, which leaves the audience with a content, yet not completely satisfying, ending. It makes the journey feel more important than the destination. However, since the journey is so wonderful, I’ll give it a pass.

Hunt for the Wilderpeople is about to be out of theaters (you might still have time to catch it at Circle Cinema!) but from me to you, please look out for it on streaming and DVD. It is a gem of a film. It mixes a tried-and-true story with new blood, a fresh perspective, and a sweet look at family and what it takes to be a family in a modern day world. It mixes sentimentality with raw emotion. The performances are great, and it is truly funny in a moving way. It is an ode not only to New Zealand, but to children still finding their homes, and to people who have one.

Now, who else is stoked for Waititi’s next film- Thor: Ragnarok?