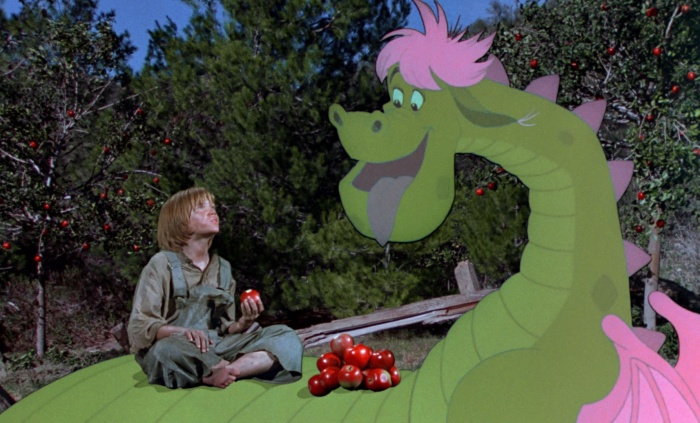 Sorry. Here instead is a rewatch of the original!

I must confess, before anything else, that I am quite partial to this film. It’s been an important film to the Dorst family for a while. When my dad was a kid, he watched it with his family. When my sister and I were little, we watched it, too. We’re very defensive about it, and it gets quoted a lot in our household.

However, I’m going to do my best to put that aside and review the film for what it is- a heartwarming, wholesome and sweet film that, while it is no Citizen Kane, is too much fun to pass up.

The film begins with easily one of the darkest Disney scenes ever. The Gogans, a nasty family, have adopted Pete (Sean Marshall,) a young orphan, and are trying to find him after he runs away. They sing a lovely song about how they’re going to brutally murder him. You thought Bambi was bad.

This scene of the Gogans hunting down Pete and singing about working him to death is disguised with slapstick and mud-pits, so everybody wins. They eventually leave, and Pete comes out of hiding. We discover he has a dragon with him- an animated dragon named Elliot- who can turn invisible at will. He’s big, green, pink, friendly, and best of all, doesn’t act like a dog. That’s something I like. The filmmakers decided to take the time to decide what a dragon would be like, and didn’t just give it the personality of a dog, unlike more modern Disney fare where all the animals act like dogs (Maximus the horse from Tangled, Sven the reindeer from Frozen, etc…).

Pete and Elliot rhapsodize their love for one another in a song, then Pete decides to head to the nearest town, Passamaquoddy. There, Elliot causes mischief and scares the local drunk Lampie. Pete gets upset with Elliot, but later in a cave they make up. Meanwhile, Lampie (Mickey Rooney) goes around to the local bar, yelling about the dragon. His daughter Nora (Helen Reddy) comes and gets him. They go back to their lighthouse, where Nora finds Pete. She invites him inside, and she learns about his abuse.  Nora doesn’t believe in Elliot, but she wants to take care of Pete, so she humors him about his ‘dragon.’ About the same time, Dr. Terminus and his “intern” Hoagie, con artists pretending to sell miracle cures, arrive in Passamaquoddy. When they hear about a dragon, they get interested and team up with the Gogans to snatch Pete and Elliot.

Dr. Terminus’ first scene (and really, let’s be honest, every one of his scenes) is one of my favorite scenes in all of cinematic history. Jim Dale kills it as a whimsical, memorable, yet still subtly menacing villain. All the characters in the film shine, because they’re allowed to be big and bold. The film is a musical, and it has all the sensibilities of one.

Another standout in the cast is Nora, one of the most underrated film role models I have ever seen. Films today are so focused on making their female characters strong physically that rarely do they give these characters mental strength, and more importantly, acknowledge and appreciate that type of strength. Nora is kind, wise, compassionate, while at the same time also being brave, determined, and smart. She works hard and never lets people take advantage of her or the people she loves. Helen Reddy, who was mainly known as a singer at the time, is fabulous in the role, and her singing shines.

Pete’s Dragon is a movie all about love. The love between Pete and Elliot. The love between Nora and Pete, Nora and Paul, and Nora and Lampie. The film ends happily because all the characters find a home with love in it, and it succeeds, not in a Pollyanna way, but because it earns its happy ending. The characters go through hardships, but endure. The optimistic outlook on life is a nice reminder in an age that is obsessed with darkness and gritty realism, and it’s only accentuated with the bright settings, jokes, and of course, Elliot. The animation for Elliot holds up surprisingly well, and even if some effects are outdated, the timeless setting of Passamaquoddy makes up for it.

The film, however, isn’t without its flaws. The plot sometimes drags. The slapstick can get old. The musical numbers can feel long when the actors are just standing and singing them. In case you need to take a break during the film, I’ve helpfully listed the soundtrack below and what purpose each song serves, so you know what you can miss.

“I Saw A Dragon”- The waste of good beer ft. Nora

“Passamaquoddy” – Before we had the FDA….

“Candle on the Water”- Oscar please!

“”Every Little Piece”- The PETA song

“Brazzle Dazzle Day”- This seems like a rather informal adoption, but okay

One thought on “Pete’s Dragon: A Rewatch”