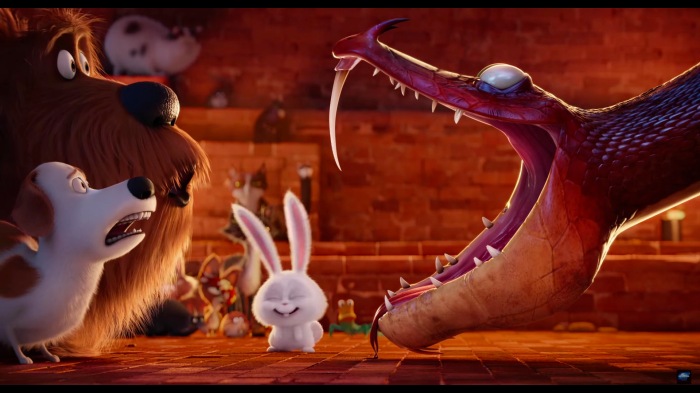 With the number of animated movies these days revealing the truth to us about the secret life of our household when we’re not around, it’s a wonder more people don’t quit their jobs so they can stay at home and catch their household possessions in action.

As we found out with Toy Story, Flushed Away, Bolt, and The Aristocats, our toys and pets have lives of their own. The Secret Life of Pets is here to bring us another story from that world.

The film is about Max (voiced by Louis C.K), a spoiled yet lovable dog that has an unshakable bond with his owner Katie (Ellie Kemper). Max lives a comfy life, split between being with Katie, and when she is gone, being friends with the fellow pets next door. Everything is great until one day, when Katie brings home a big, unruly dog named Duke (Eric Stonestreet). Max tries to get rid of Duke, only to find himself and Duke lost in the city, and at the mercy of a vicious pet gang led by a savage bunny named Snowball (scene-stealer Kevin Hart).

The Secret Life of Pets’ plot is a tried and true staple of kids’ movies, but that in itself doesn’t create a winner. What creates a winner is the film itself, and The Secret Life of Pets does a great job of taking the elements that work in this sub-genre and making the whole movie about these things. For example, the best parts of the things-that-don’t-talk-now-talk stories are the secondary characters we meet along the way, the bonding that happens between the two main characters, and the adventure. The Secret Life of Pets hits all these marks.

The secondary characters in The Secret Life of Pets are the most fun and interesting I’ve seen in this type of movie since Toy Story. There are a lot of characters to be sure, making me wish for more screen time for some of them, but they all add something. None of them were annoying or useless. Whether they were there for visual gags, or witty dialogue, or animal jokes, each character had a place to shine. The bonding between Max and Duke worked. Duke’s backstory is heartbreaking, and the bonding seemed earned. Max learns a lesson, and so does Duke. That’s a solid message, even if it has been done before.

The adventure through New York City is enchanting. It can be chaotic, silly, and sometimes long, but it is always creative. Alleyways, sewers, cars, streets, building tops, and fire escapes all become exciting props for this cast to use.

The biggest flaws in the movie aren’t anything new for this type of film. The pacing can be wonky sometimes. There are some unnecessary butt jokes that are becoming a staple of Illumination Entertainment. The film doesn’t have any deeper meaning than “be nice to people that annoy you and don’t judge.” There is not one, not two, not three, but four scenes where an animal drives a car (and you thought Finding Dory was bad).

For its flaws though, I had a smile on my face the whole time. I laughed out loud. I want a sequel starring Kevin Hart’s crazy bunny. I would easily watch this movie again. This is a great choice for families. It will entertain kids, make parents smile, and maybe make you hug your pet one more time before walking out the door. It’s a celebration of fun, summer, and our loved ones (furry or not), and that’s not something to dismiss.

One thought on “So That’s What My Hamster is Doing While I’m Away: The Secret Life of Pets”