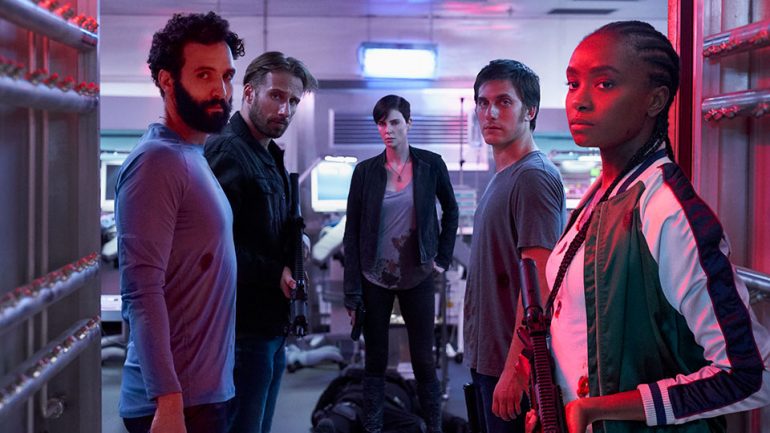 Netflix is here to save the summer movie season. Or, at least, give us a little oasis in the midst of the current movie desert. Last Friday they dropped The Old Guard, which stars Charlize Theron as a leader of an immortal gang of warriors who receive a new recruit. I am happy to report that The Old Guard is an exceptional summer action film, and would be whether it was released during a pandemic or not.

There are three components to The Old Guard that make it stand out.

First: Action sequences where you can actually make out what is happening! They are inventive, play around with setting, and reveal things about each character. The stunts are excellent, and if it wasn’t clear before, it is now that Charlize Theron is a credible action star, carrying herself with such gravitas that every time she cricks her long neck I know some serious business is going down. There’s an airplane fight brawl between Kiki Layne and Theron that is particularly fun.

Second: Tropes, but good! Yes, tropes are not inherently bad- they’re tropes for a reason, people like them. And what is a trope for one group or demographic may not be a trope for another. For example, “grizzled professional who is too old for this shiz teaching a younger recruit” is a trope… for men. But having it between two women, here with Andy (Theron) and Nile (Layne), is rare, and The Old Guard makes good use of it in a way that is compelling for both characters. Likewise, the film’s central group of warriors is based in the found family trope (one of my personal favorites) which is when a group of characters who have no families of their own (or are estranged from them) come together to create their own family. A lot of superhero movies pay lip service to this trope (although some wrestle more honestly with it). But The Old Guard takes the time to build these relationships up so they are believable, and then complicates this family through love, betrayal, death, and conflicting philosophies. Because of the way the tropes are thoughtfully executed in service of the larger film, and because of who is enacting the tropes, the tropes here aren’t stagnant.

Third: The script, written by Greg Rucka, based on his own comic book of the same name, takes the time to examine the conflicting philosophies of the various characters and ponder the existential questions that come along with immortality. I was continually shocked by the new problems brought up regarding immortality, and there are downright disturbing implications examined (Quynh’s fate? I got chills. The horror of having a body that acts autonomously from yourself? Fascinating!). All of this makes The Old Guard more concerned with consequences than your average action flick, which are too often rushed to get to the next set-piece. The Old Guard is fast-paced, but never rushed.

There are some editing issues, questionable music choices, and a few story beats that miss the mark, but these issues hardly detract from the overall film. Kiki Layne (If Beale Street Could Talk) makes a star turn here, and director Gina Prince Bythewood should be locked down for directing a sequel immediately. If you’re looking for a fun watch with a little more substance, I highly recommend this gem.

2 thoughts on “The Old Guard”