Skip to content
thedudeabidesinsouthflorida in Drama, I Can't Believe This Didn't Win An Oscar, Those Elitist Snobs, New Releases May 28, 2020February 22, 2021 1,621 Words 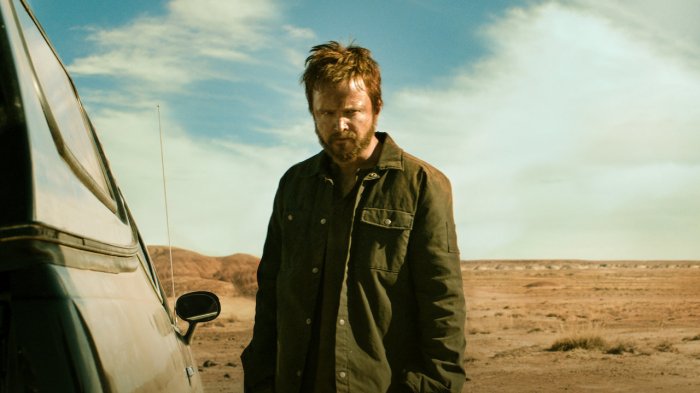 Imagine a new world with me for a moment: I’m Vince Gilligan. I’ve spent the last six years being asked by fans what happened to Jesse Pinkman at the end of Breaking Bad. I can’t sleep well at night knowing that the fate of this beloved character that I tortured for years is still up in the air. I convince Netflix to give me a couple million dollars, and I write El Camino. I set it five years in the future, and tell a lovely and painless story of how Jesse Pinkman moved to Alaska, became an artisan carpenter, adopted a dog, bonded with his neighbors, is crushing it in therapy, and is now a big-brother mentor at the local elementary school. Aaron Paul wins five Oscars for it. How is that even possible? It just is.

But alas, I am not Vince Gilligan, and instead, El Camino starts mere seconds after where Breaking Bad left off, with Jesse driving into the night after escaping the Brotherhood’s compound. The movie covers roughly the three days afterward as Jesse gets the money he needs to start his new life in Alaska.

The largest criticism leveled against El Camino were accusations that it is superfluous. Jesse ends Breaking Bad driving to an unknown future, and that’s exactly how El Camino ends, too. Nothing in El Camino changes or informs us of anything new about Breaking Bad. So the accusation that it is superfluous is true- if you’re thinking purely in terms of plot. But plot and story are different things. The plot of The Lord of the Rings is getting the ring to Mordor, and everything after is technically superfluous. But the story of The Lord of the Rings is that of Frodo Baggins (and company) leaving the Shire to do an extraordinary task and the personal sacrifice it takes, which makes it impossible for Frodo to return to things the way they were. It’s that story that makes the long ending of Return of the King necessary.

The plot of Breaking Bad may be over, but the story of Jesse Pinkman is not. Jesse’s ending in “Felina” completes the plot, but it doesn’t complete Jesse’s arc, because “Felina” ends with Walt freeing him from the Nazis, and that’s Walt taking action, not Jesse. Instead, Jesse’s arc has to be about him taking action to free himself, which is exactly what El Camino does.

The vice of Jesse Pinkman throughout Breaking Bad, more than his addictions or recklessness, is his malleability. He’s a sponge to outside influences, always looking to others to help him find a sense of direction and identity. His loyalty to these influences- Jane, Mike, Gus, and of course, Walt, form mental imprisonments that lead to his physical imprisonment. El Camino is about liberating Jesse from both.

Part of the way the film explores Jesse’s liberation and reclamation of personal agency is by building upon a connection that formed in the latter half of season 5, which is the comparison of Jesse to a dog. The title of episode 12, “Rabid Dog,” is in reference to Jesse and is when the connection is made explicit. Jesse has become a loose cannon to Walt’s operation, and Saul Goodman suggests to Walt that he should see this as “an Old Yeller type situation” where he might need to put Jesse down, like a rabid dog. Walt stalls, but eventually hires Jack’s gang to do the deed.

The connection isn’t random; Jesse has always been a bit like Walt’s dog, tragically loyal and always there to be kicked around whenever Walt is angry. In El Camino, this connection is taken to its extreme, particularly in the flashback scenes of captivity with Jesse’s interactions with his primary captor Todd (a fantastically creepy Jesse Plemons). Now literally in a cage and on a chain leash on a dog cable run, Jesse has been dehumanized more than ever. Little actions from Todd- licking his hands and smoothing down Jesse’s hair, spraying Jesse with a water hose to clean him off, patting Jesse on the head as he sits crouched over in the car, his condescending words of positive reinforcement- all go to show that, as Plemons says in The Road to El Camino: Behind the Scenes of El Camino: A Breaking Bad Movie, “I think Jesse’s part [Todd’s] pet, and [Todd] thinks that what he’s doing is best for [Jesse], even if Jesse doesn’t realize it.” This is a sentiment similar to what Breaking Bad writer Gennifer Hutchison says of Walt, that “Walt does care about Jesse. The great thing about Walt is he kind of believes his own lies. He really does think he’s doing what’s best for Jesse.” In El Camino we finally see Jesse breaking free of these captors and regaining his humanity. Finally, it’s Jesse who is doing what is best for Jesse.

All of this is conveyed through a truly captivating performance by Aaron Paul, whose work here is certainly cut out for him. He’s returning to a beloved character six years later, which alone brings plenty of skepticism. He has to play Jesse in five different time periods, and he has to overcome the sizable age difference between him and the character (Paul’s age works towards conveying that Jesse has been aged by his experiences, but can be distracting in flashbacks.) He has to track Jesse’s constant ups and downs, progresses and regresses, put well by Donna Bowman for the AV Club, “Gilligan’s camera won’t let us look away from [Jesse]: painfully infantilized by Todd in flashback, flinching and broken at Badger’s house, desperate in Todd’s apartment, regressing to petty defiance at the vacuum shop, and wearily dominant at Kandy Welding.”

Most impressively, Paul portrays Jesse as he is processing this deluge trauma in real-time, while also trying to fight it off, knowing that, as Brian Tallerico says for RogerEbert.com, “he does not have the luxury of time to grieve or heal [yet]… capturing the push-and-pull of trauma and need within Jesse.” Jesse has been in survival mode for so long that he can barely remember who he is outside of those basic instincts, making the moments where we see glimpses of “old Jesse,” precious glimmers of hope. Through the extensive flashbacks, Paul is able to weave together the different versions of Jesse to remind us of the person who is still there beneath the feral survivor.

The only thing about El Camino that gives me pause is the climactic shoot-out. So much of Jesse’s character has been about his guilt over the violence he’s caused, and his quest to leave this violence behind him. To have the climax of the movie require Jesse to kill two men feels… wrong?

On the one hand, Breaking Bad has always been a western, and El Camino leans heavily into the genre’s tropes and aesthetics. I think incorporating the genre conventions are fun, and a shootout is classic Western. Also, Jesse doesn’t go into the situation with the intention of violence, and the duel is mutually agreed upon. It’s an “honorable” killing, as moral an act of violence ever gets in the world of Breaking Bad. And, as a cherry on top, the man Jesse duels is the man who built the rig-system that kept Jesse captive, so there’s a sense of righteous retribution.

But. On the other hand, the rule of threes means that this shoot-out scene is thematically connected to two previous scenes in El Camino. The first is a flashback with Todd, when Jesse gets his hands on a gun while he and Todd are out in the desert burying the housekeeper. The second is when Jesse hands himself over to the fake cops, rather than kill them. As James Poniewozik says for the New York Times, Jesse “gets a ‘Coward of the County’ Western arc, twice surrendering his gun to bad men who break his will, then finally winning his freedom in a shootout. The beaten cur gets his mojo back by pulling the trigger. Walt would be proud.” The progression of these scenes, of Jesse suffering greatly twice before for not pulling the trigger, and gaining his freedom in the third, sends the message that Jesse had to enact violence. Pulling the trigger is part of his liberation. It was necessary, part of his character growth. In a way, it also implies that Jesse surrendering the gun twice earlier was a sign of weakness.

I hate this implication. What has always been most powerful about Jesse is his aversion to violence and his conscience. In the Breaking Bad ending, Jesse doesn’t kill Walt because Jesse has always been better than Walt. He doesn’t run from the consequences of his actions. He accepts them and endures them. Jesse isn’t like Walt, that’s why we love him, and his final actions in El Camino shouldn’t be about becoming more like Walt or doing something that Walt would approve of.

So.. sorry Vince, the climax doesn’t do it for me. But that’s hardly enough for me to disregard the rest of the movie, which otherwise is the perfect mix of soul-crushing sadness and hopefulness that we’ve come to expect from the Gilligan-verse, and is a fitting ending for Jesse. But if, say, we’re looking at an El Camino Dos: A Breaking Bad Movie Sequel, Vince, I have the perfect pitch for you.