In a possible attempt to be the anti-Hallmark Christmas movie, Last Christmas tries to be five different movies in one, with each storyline being just off-kilter enough to not be formulaic or guessable.

Once you think you’re watching a quirky romance, you’re actually watching the psychotic breakdown of a woman who is falling in love with the ghost of the man who gave her a heart transplant last Christmas (“Last Christmas, I gave you my heart”- get it? GET IT?!). Once you’ve adjusted to the ghostmance, you’re actually watching a workplace rom-com. Then, wait- this movie is actually about the rise of xenophobia with Brexit and rising politicals fears. Then you’ve got a subplot about a woman who’s scared to come out as gay to her family. But wait again! This movie is actually about the holiday spirit as a woman is faced with the realities of being homeless. But it’s all cutesy enough not to feel, you know, uncheerful.

I can’t say the film does any of these stories or tonal shifts well. It’s too busy trying to tie all these half-baked ideas together that it never gets around to saying anything.

Yet… it charmed me?

Stars Emilia Clarke and Henry Golding really do have nice chemistry, and Clarke is immensely charismatic. The holiday cheer is undeniable throughout the film, yet there’s also a refreshing amount of admission that for many people, Christmas is still wrought with real problems.

At most, Last Christmas is a rental. I doubt it will be remembered as a Christmas classic. But it might just be remembered like the WHAM! song it’s based on- often irritating, but sometimes it hits you just right. 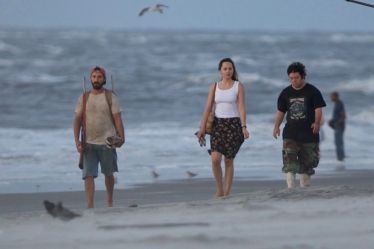 Like many critics have already pointed out, Peanut Butter Falcon is reminiscent of the works of Mark Twain, particularly The Adventures of Huckleberry Finn. The story of a young man with down syndrome (Zack Gottsagan) escaping from his care facility and joining an outlaw (Shia LaBeouf) on the run is the best kind of a feel-good buddy dramedy. It has both the heart and the smarts, and great performances all around.

It also captures the deep South authentically. It’s able to portray some of the worst aspects of the region without feeling condescending or patronizing (unlike some films, *cough* Three Billboards Outside Ebbing Missouri *cough*).

The only weak spot is the ending, which feels hastily wrapped up in a way that suggests the screenwriters didn’t know how to end the story. But it doesn’t ruin the film and, in a way, keeps the overall fable-like tone. Peanut Butter Falcon is a great choice for an almost all-ages movie night and is, as the kids say, truly wholesome.

A Beautiful Day in the Neighborhood

A Beautiful Day in the Neighborhood plays like an episode of Mr. Roger’s Neighborhood, but for adults. Because of that, Mr. Rogers (played by Hollywood’s Mr. Rogers, Tom Hanks), isn’t really the lead. This film isn’t going to give you more insights into Rogers, like last year’s excellent documentary Won’t You Be My Neighbor? will. But if you want to understand what it’s like to be on the receiving end of Roger’s gentle teaching and affirmations, and maybe think through some anger or bitterness you’ve been holding onto, this movie is the perfect way to do it. It’s an ideal holiday movie in this regard, and a great watch. If the documentary answers the question of who Mr. Rogers was, then this film answers the question, “How was his show and teaching style effective?” Just keep in mind that this film is for teens and adults- there won’t be much for kids.

A lot of praise has already been heaped on Marriage Story, and with good reason. It truly is a great film, full of raw emotion, layered performances, and a lot of truth.

I don’t usually let distance from a film’s subject matter keep me from commenting upon it. But as someone who doesn’t have any experience with the deeply complicated and personal topics of the film, I feel particularly ill-equipped to say much about Marriage Story. I think it will speak to everyone in a different way. All I’ll say is that I highly recommend it.

Bomshell is this year’s Vice or The Big Short, using an Adam McKay-lite style to tell the story of the women who brought down Fox News’s Roger Ailes and broke some of the first ground of what would become the #MeToo era of exposing sexual harassment and assault.

When talking to a friend of mine who was interested in seeing the film, he admitted that he was reluctant because he felt the trailers had made the film seem like it was going to be saying all men are evil. He is also conservative and didn’t want to sit through two hours of bashing Fox News. I was able to tell him that while this film isn’t pro-Fox News or its particular brand of conservatism, Bombshell is less concerned with liberals vs. conservatives and more concerned with right vs. wrong, no matter what side of the aisle you’re on. There are jabs at both liberals and conservatives, and there are voices in the film that speak to the positives of Fox News. It’s a much more balanced film than either of McKay’s works.

The point of Bombshell is not to say “men are trash” or to condemn all conservative news outlets. Instead, it is to show how a system of power and predators can be built, how it’s controlled, and why so many are victims to it. This system is not just a Republican thing- it’s a human thing. The film makes it clear the paranoia this system feeds and how high the stakes are for the women who come forward with allegations. It shows that changing any social ill takes both individual leadership and institutional change.

Bombshell isn’t content with just exposing Roger Ailes. Instead, it goes beyond one bad man and interrogates many of the elements that go into making a workplace toxic. By examining these systems, the film engages in a form of sociological storytelling. That makes it a film that goes beyond being timely into being important.