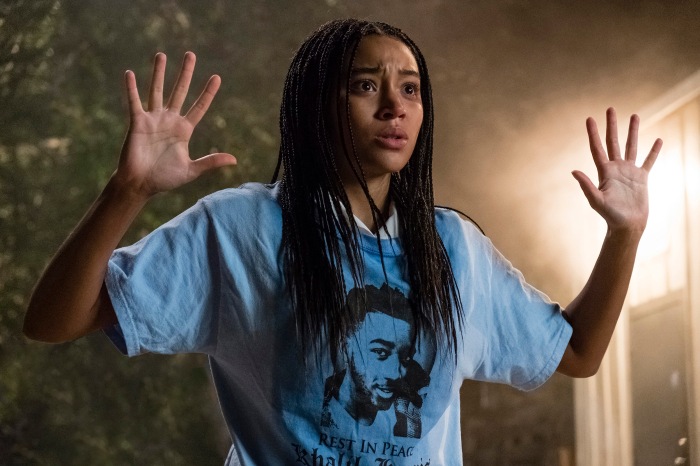 The Hate U Give is based on the best-selling novel by Angie Thomas. It follows a young black girl named Starr Carter, (Amandla Stenberg) who struggles to live between the world of her black neighborhood and her white preparatory school. After her childhood friend is shot and killed by the police at a traffic stop, the divide between her world becomes bigger as she struggles with whether to step forward as a witness to the shooting.

So why is The Hate U Give the best Christian movie of the year? After all, it’s not from the Kendrick Brothers, it’s not the next God’s Not Dead film, and it doesn’t have any children coming back from heaven. It’s not been advertised as a Christian movie in any regard.

It’s the best Christian movie of the year because it is a film that sees its characters the way Jesus sees us. It takes a complicated situation and slowly unravels all of its layers with empathy, lament, hope, and a cry for reconciliation and justice. It is a movie that is pro-life. It advocates for protecting the oppressed and recognizes the value and dignity of every human life. It is an honest movie because it laments the hate in our world and recognizes that it comes from everyone. It sees all of its characters as complex people who are sinful. It confronts large-scale systematic injustice and small-scale prejudice, without ever turning into a movie about us versus them. Instead of running away from the characters who appear to be in the wrong, the movie moves towards them with compassion. It looks suffering and pain square in the face- although it is never gratuitous- and then looks up in hope. It doesn’t just ask questions, but suggests solutions, all without acting like it has all of the answers.

I don’t mean to make this sound like a pure message-film. I’m sure some viewers will approach the film with cynicism thinking, it’s just Oscar-bait because this is the next cause the liberals want to back. It’s going to be preachy and one-sided. This is not the case. The Hate U Give is an effective movie, but not because it is “trendy” or “topical.” It is the fact that it feels (unfortunately) timeless that makes it so strong. And yes, it does have a message (all films do) and there are moments in the film where this isn’t exactly subtle. But, the film is always centered on its characters. Everything else is secondary. It is about one girl’s life, and while her viewpoint touches on bigger issues, it’s about her. In fact, there are only one or two scenes in the film that don’t have Starr in them. This is what keeps the movie grounded, even as it deals with so many issues, and this is what will make you remember it once you leave the theater. You will remember Starr and her family.

The Hate U Give is also a must-see because it is just an excellently made film, which seems to be something a lot of Christian movies are afraid of being. The writing, directing, and cinematography, in particular, are excellent, and the actors are all spectacular. Not to be punny, but Amandla Stenberg is a Star. She carries The Hate U Give and ups the game of everyone around her. In fact, the only weak cast member is Anthony Mackie, whose charisma is clearly miscast in a role in which all he does is stand around and give the same I’m peeved and intimidating look.

Another reason it is a must see is because the film equips white viewers with a guide on how to be an ally. It first asks you to look beyond stereotypes with compassion. Reading the book and seeing the movie made me think about if my friends of color felt like Starr. Did our majority white high school force them to be someone else? How did I contribute to that? Secondly, the film gives you examples of how to react if someone accuses you of doing something racist. Getting defensive does nothing- it just kills the relationship and any potential for learning. Instead, seeking to understand why you’ve been accused and how to make amends is what furthers and deepens a relationship. And third, the film shows you how to be an ally within a larger movement. How can white allies help Black Lives Matter? The movie’s advice is to listen to the people of color in charge and follow their instructions (as your conscience allows). Support them, learn from them, and amplify their voices over your own.

A small warning though: at over two hours, the film has cut a lot from the book, and most of the things it cut were the happier moments, which means the film is a non-stop gut punch, with very few moments of respite. The moments of peace given are extremely effective, but by the end of the film, you will feel as emotionally drained as Starr. That’s an excellent movie-going experience if you ask me, but do be prepared for a heavy two hours. When I was walking into the theater, I was nearly backed into by a car in the parking lot. When I walked out, I felt like I might as well have been hit by that car.

The Hate U Give is a challenging film because it refuses to be easy. It doesn’t let you walk away feeling smug or self-righteous. Instead, it gives more nuance than our polarized age wants to allow. It’s a film I hope Christian filmmakers and studios will pay attention to, and it’s one you should pay attention to, also. It’s one of the best films of the year.

If you’d like to think more about films that view their subjects in a Christ-like way without necessarily speaking directly about Christ, I highly recommend this article: https://www.thegospelcoalition.org/article/christ-like-gaze-film/

2 thoughts on “The Best Christian Movie Of The Year: The Hate U Give”