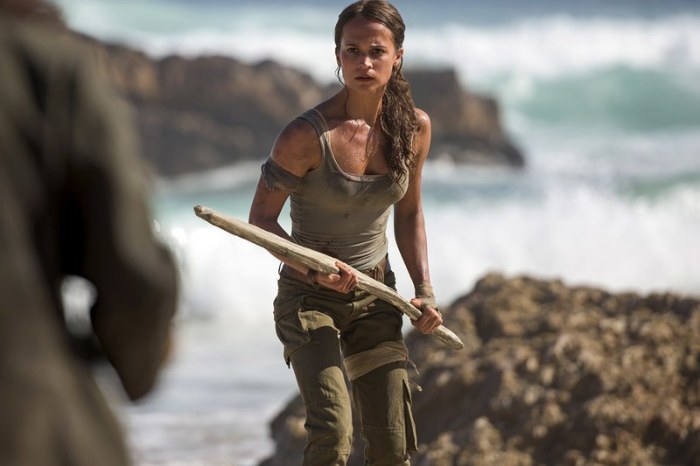 In elementary and middle school, one of my favorite movie series was the Nicholas Cage National Treasure films. They were the perfect sleepover movies to watch with friends, to ooh and aww at the exciting chase sequences, and to laugh at the jokes. They weren’t great films, but they were fun, exciting, and tried to teach a little history and patriotism. I’m not familiar with the Angelina Jolie Tomb Raider films, or the original video game this film is based on, so as I watched the new Tomb Raider (2018) it was not those images that came to mind, but National Treasure.

Now, this new film is fairly predictable. There were a few times that I found myself saying the next line of dialogue (“The tomb’s not trying to keep people out… it’s trying to keep people in!”), and a careful viewer can point out the twists a mile away. Yet, by the end I had decided that at my next sleepover, I was going to switch out National Treasure for Tomb Raider, because while it’s not necessarily a better film, it’s a smarter one, and I couldn’t help but fall a little in love with it.

Alicia Vikander makes a star turn as Lara Croft, who goes on a search for her missing adventurer father (Dominic West). She teams up with Lu (Daniel Wu) to travel to a secret island off the coast of Japan to find him. This is Lara Croft’s origin story, showing the younger, less experienced Croft come into her own as the Tomb Raider. The film screams “franchise,” even setting up a sequel at the end, but it knows its strength, which is not the plot but the character the plot is based around. Even when I didn’t much care for what was going on in the film, Vikander’s Lara Croft had me hooked.

It adds another level of engagement and excitement when you can relate to the person on screen so deeply. Sure, I will never be Lara Croft, as much as I would like to be. But Vikander made me believe perhaps one day I can at least meet a Lara Croft-esque person that I can be friends with. The film, different from the original Angelina Jolie ones, is shot through the female gaze. This term does not mean the men in the film are treated badly, or that it is a feminist manifesto (it was even directed by a man with the manliness of names, Roar Uthaug). It simply means the film appeals to the female audience by not sexualizing the female characters and providing complex portrayals of characters that can enact female fantasies and escapism. And this worked wonders for my viewing; it was impossible for my friend and me not to spend the entire movie talking (and by talking I mean sparse whispering, as I am a courteous theater attendee) to the screen as if Lara were one of our friends.
“No, Lara, don’t go in there!”
“Punch him in the adam’s apple! YESSSS- my mom told me about that move.”
“Don’t let him talk down to you like that, Lara! Okay good, you’re escaping. Good call pal, good call.”
“I want to borrow your leather jacket. Where did you get it?”
“How… how do you get biceps like that? I can’t even do one pull-up.”
“Now that’s a nice guy, be friends with him!”

Lara Croft is a video game action heroine for sure. She does impossible stunts, survives insane injuries, and is perfectly film-suave. She doesn’t change much over the course of the film- she starts out independent, adventurous, and smart, and ends that way as well. But, there are a few details thrown into an otherwise pretty conventional film that both point to what possibly could have been, but also elevate it significantly.

There is clear attention to detail regarding how Lara could realistically take down men twice as strong as her, and the movie makes it clear how challenging that is. And when she does have her first kill in self-defense, she sits by the body and cries. It’s a stunning moment of humanity in a genre that rarely ever treats the villain body count as something to care about.

The film also takes the father-daughter storyline and elevates it by swelling to the emotional reunion- and then creating sophisticated conflict between the two that isn’t really satisfyingly resolved. The rest of the film is spent with the two in unease and heartache, and watching Lara wrestle with forgiving her father, and vice-versa, added a level of emotional resonance and maturity, even as Walton Goggins yelled about mummies and curses during the finale.

I could talk more about Tomb Raider’s flaws and how it is indicative of the origin-story- video-game-adventure genre overall, but honestly, I had a great time watching this film. If you like movies like National Treasure and Raiders of the Lost Ark– and you know who you are- then I really think you’ll enjoy this Tomb Raider. It’s a step in the right direction for the franchise which I hope will get a sequel, and I’m excited for Alicia Vikander to get to play this character again and get more roles in the future. Sometimes, fun movies can be fun, and Tomb Raider is just that.