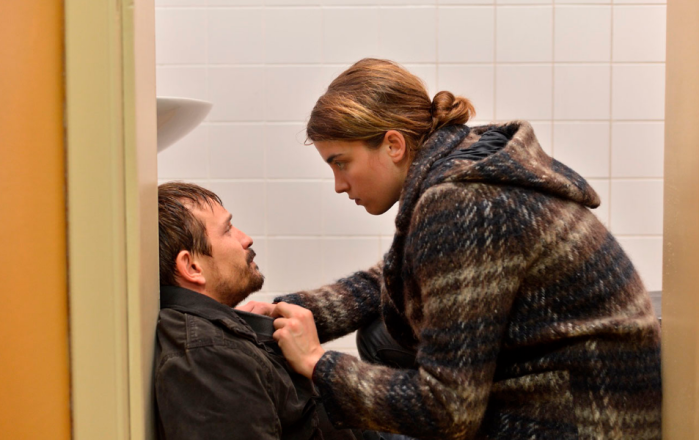 What responsibility do I have to a stranger?

If I see someone on the street crying, I don’t comfort them. Right? Keep to yourself. Don’t interfere.

But what if I see that person fall down? I don’t help them up, right? They can pull themselves up. Toughen up. They probably don’t want my help.

What if they walk in front of traffic? Are hit by a car? I interfere, right? But what makes that different from the other times?

Dr. Jenny Davins is a gentle, considerate, helpful, caring, practically perfect doctor to her patients. She makes house visits at weird hours of the night, sleeps in her office, and will drop everything to take care of you. She is far overdue for some time to herself, time to close her doors and get some rest.

But one fateful night, when she closes her doors and ignores a woman who knocks, the woman shows up dead the next morning. Who is to blame? Certainly not the good doctor. Nobody blames her.

The Unknown Girl is a Belgian French foreign-language film from the respected Dardenne brothers. Please don’t let that scare you off! I’m a little hesitant about foreign language movies, too (a small piece of my father’s soul just died), but I am very, very thankful I saw this one. Trust me, the mystery is so gripping and the acting and story so powerful that the inconvenience of subtitles becomes nothing in their wake.

The Unknown Girl has on display some of the better qualities of European films compared to American films. Generally speaking, in American films, every character and shot is glossy. Even with those that aren’t trying to be, there are things that just make the reality of the movie out of reach. The characters never stumble with their words. Conversations always have a great pacing. The characters never wear the same clothes or hair twice, and they’re certainly never within my price range. No time is wasted on small details when there is the overwhelming push for action and plot.

The Unknown Girl kept surprising me by breaking all of those rules. The Dardennes are known for their documentary-like style. This film does not rush itself or its story. The quiet revelations and heartbreaking moments knock quietly, and the simplicity of each scene is so natural that I could see interactions I’ve had in my life reflected in the ones on the screen.

The greatest part of the film, though, is its star, Adele Haenel. She centers the film with an unexplainable intensity and quiet charisma. In her, I saw myself. Or rather, potential for me. Here was a character that I could look up to, because she was in my reach. I don’t look up to superheroes or Katniss Everdeen or Harry Potter. They are too good in too fantastical of worlds. I can’t match their heroics or even force of personality.

But maybe, just maybe, I could have the integrity of courage of Doctor Davins. Maybe I could be afraid like she was, but go on. Maybe I could care as much about people as she did.

I was moved by The Unknown Girl. Moved in a different way from other movies of the year. I was swept away by the grandeur of Beauty and the Beast and War for the Planet of the Apes and Dunkirk. I was startled and entranced by the uniqueness brought to Logan and Wonder Woman and Baby Driver. I cheered along with the victories of The Big Sick and Battle of the Sexes and To the Bone. A little piece of me died with Despicable Me 3 and The Emoji Movie.

None of these films, though, made me empathize and despise a character at once, or even grasp for a moment my ability to be like them. None of them made me rethink my own actions towards others, and none of them left me feeling as full and hopeful the way The Unknown Girl did.

3 thoughts on “Our Responsibility to Strangers: The Unknown Girl”