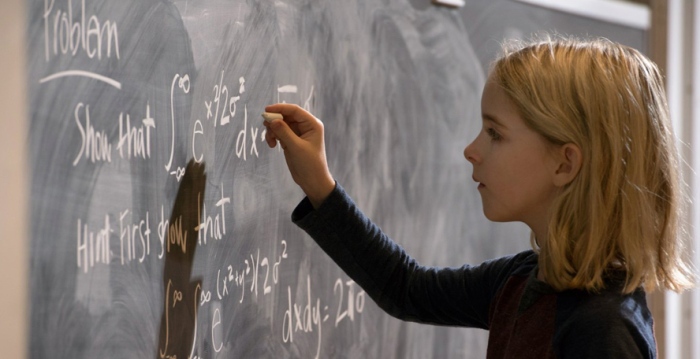 But Mary (Mckenna Grace) is a different kind of gifted. She’s Stephen Hawking, Albert Einstein, Katherine Johnson level genius. She’s far beyond what any elementary school could teach her, and who would want such a gifted child to be stuck with kids still learning basic addition?

Her Uncle Frank (Chris Evans), that’s who. He wants to raise his niece right, after her mother took her own life. And right means normal and happy and not-weird. Too bad Frank’s mother Evelyn (Lindsay Duncan) doesn’t see it that way.

Director Marc Webb is back from directing the two totally not controversial or hated Amazing Spider-Man films, and is ready to go back to telling small, stand alone stories. He made a name for himself with 500 Days of Summer, and now, armed with a script from the Blacklist and star power, he’s ready to go.

Speaking of star power, the real tragedy of this film, beside suicide, neglect, abandonment, and disabled cats, is Octavia Spencer getting another underused role. She gets maybe fifteen minutes of screen time. Give her the deep acting role! I know she was busy getting Oscar nominations and literally playing God, but come on! You had Octavia Spencer!

Meanwhile, Chris Evans gives this movie his all. He’s going for gold. When he’s in the courtroom, you can see Jack Nicholson from A Few Good Men playing behind his eyes. When he’s staring off into the sunset, you can tell he watched at least two Daniel Day-Lewis movies. He portrays Frank’s insecurities about his abilities, and his devoted love, with sincerity, charm, and ease. He does his darndest, and for the most part, it works.

It’s screenwriter Tom Flynn (Watch It (1993)) that is the biggest problem. Just like Frank in this movie, I think Flynn has some self-doubt to work through. His script is good. There are quite a few moments, particularly in the familial drama department, that got me. As things were revealed throughout the film, I was excited about how it would impact the rest of the story.

Then, Flynn loses his nerve. He seems to get worried the nuances of his script and the threads he had laid won’t be enough. So he adds things. Sure, a child being ripped away from her guardian is tough, but you know what is tougher? A one-eyed cat about to be put down. Sure, Frank is shown to be a good guardian throughout all the scenes, but you know what will really make him a hero? If he storms into a shelter, rescues/steals three cats, then trespasses to take back his niece with some questionable legal skills. Sure, the teacher and Frank have a connection, and Frank wants a life and fellow adult connections, but you know what will really show that? Besides a drinking scene where they literally tell each other their greatest fears? An unnecessary bedroom scene, then a basic disregard of the teacher later.

Stories about gifted kids aren’t particularly new. There have been numerous other films that have explored the idea of adults trying to make the right decisions for children, especially gifted ones. The ethical problems presented in the film are interesting though. It’s not that this sort of story shouldn’t be told again. It’s that this kind of story has more depth to explore, and I don’t think Gifted quite takes the leap from by-the-books family drama to a more thoughtful exploration of its topic.

For example, it could take a chance and make the audience feel more uncomfortable with both options. What if Frank wasn’t a lovable guy, but just a solid guardian? What if Evelyn was more likeable? What if Mary was more troubled than just being precocious? Instead, Gifted, for all of its twists, still puts people in boxes.

At one point in the film, Frank reveals to Evelyn something along the lines of somebody wanted her to die. People in my audience cheered. Yeah! Take that Evelyn! You deserve it, you monster!

So, Gifted doesn’t take the plunge. It plays it safe. While Gifted is a film with promise and talent, and is disappointing when it doesn’t go the extra mile to be better, all that doesn’t make the film bad. If you don’t go in with high expectations, it will be very enjoyable. I was engaged the entire time, and so was the rest of the audience.

Maybe, if anything, it’ll remind you of how important good role models are. Go thank your teachers and parents and anyone else in your life who has made a big impact on you. Even the people who were in a grey zone, most of them tried their best. That is one message of Gifted that is okay with exploring complexity.