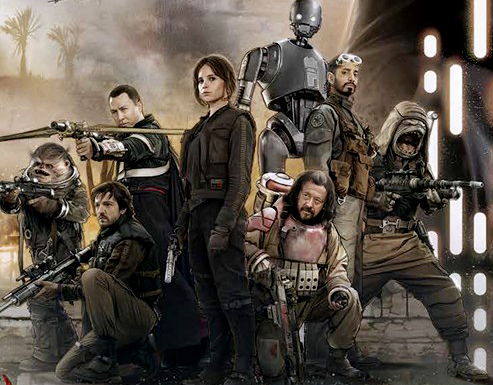 Why would the Death Star, the killing machine from Episode 4, A New Hope, have a fatal flaw? Fans for years have asked that question, as episode after episode of the Star Wars franchise came out. Some forgave, some let it go.

Rogue One, or Episode 3.9, tells the story of the rebels who stole the Death Star plans for Princess Leia. The team is led by Jyn Erso (Felicity Jones), who is not Rey’s mother, for all you conspiracy theorists out there. She is, though, the daughter of the man whom the Empire forced to build the Death Star, Galen Erso (Mads Mikkelsen). Abandoned as a child and raised by a mad-man extremist, Jyn has resolved not to care about the Empire, the Rebellion, or anyone except herself.

Until the Empire, the Rebellion, and people with issues like her pull her back in.

There are half a dozen main characters in Rogue One, and none of them get the time they deserve, even though the whole cast is likable and obviously could do more with the roles if given the chance. Jyn seems pretty much personality-less, and falls into the sole-lady-of-the-team cliche. She’s Rebellious™, and Abandoned™. Cassian Andor (Diego Luna) is Morally Ambiguous Hero™ and Courageous™ and Handsome™ and… that’s it. Chirrut Imwe (Donnie Yen) is Blind Wise Chinese Ninja Man™. Baze Malbus (Jiang Wen) is Snarky Wing Man™. Bodhi Rook (Riz Ahmed) is Quirky Space Nerd™. K-2SO (Alan Tudyk) is Sarcastic Robot™. There are some other characters too, but you probably won’t remember their names. Just remember there is an Evil Dude in White™, Farmer Scientist Dad™, and Metal Forrest Whittaker.

The first part of the film moves surprisingly slow compared to its exciting finale. Being slow is one thing, but having scenes that could easily be cut to make time for character development is a problem. However, as the team gathers and completes mini-missions leading to the actual stealing of the Death Star, director Gareth Edwards continues the breathtaking world-building of the Star Wars universe. Several planets are displayed, populated by new people and creatures. It feels less modern than some parts of The Force Awakens and the purposely low-tech look of some scenes adds to the feeling of it being pulled out between the prequels and originals.

The film shines the brightest in the end. The decision to kill all the main characters threw me off when I went in. I respect it, and am glad they did it for creative reasons and to stay with the continuity of the series, but in a Marvel/DC world, I had forgotten that was actually an option. The finals shots of all the characters, even though I had forgotten half of their names, did get to me. If you didn’t/don’t get shivers up your spine with the ending Darth Vader and Princess Leia scenes, you’re not enough of a nerd.

I want to make this comparison when thinking about the merits of the new generation of Star Wars movies. The Force Awakens was criticized for having a plot that basically copied A New Hope, but it was almost universally agreed that it had wonderful characters that have even more potential. As a character over plot person, I want to spend more time in the timeline of The Force Awakens. Not so with Rogue One. Maybe that’s because we all knew we’ll never see these characters again. This is a stand alone film. In cinematic universes nowadays, the characters have to last multiple movies (think Tony Stark- this summer’s Spiderman: Homecoming will be his 7th film appearance in 9 years). With this standalone movie, though, there are very few boxes to check (although there is shameless nostalgia and beloved character cameos). In the end, Rogue One has all the strengths and weaknesses of a standalone film in a great franchise.

The two main characters- Jyn Erso and Cassian Andor don’t really have emotional arcs at all. The fact that they are the rebels, and we know their fates, is the emotional hook for the audience. That’s a hook based on nostalgia, and I would make the case that it’s worse than any The Force Awakens nostalgia. At least with that film, the characters had emotional arcs for the hook. This film’s whole reason for existing and for us caring about the end is because of A New Hope.

While watching the end of the movie, in the company of 13 Jr. High girls and a couple beside me furiously making out (because what sets a romantic mood better than everyone dying on a screen in front of you, and 13 people dying beside you, but for very different reasons), I was trying to make sense of what about Rogue One didn’t engage me like I wish it had. The movie had a darker tone, and I liked that. There were a couple of moments that seriously sent shivers up my spine. The movie is well-crafted technically and from a story perspective (again, well-woven plot). The final battle is good. Just swell. I really did enjoy a lot of the film.

I wish I could hyperbolize and say, “This is the best movie ever,” or “This is the worst movie ever.” It’s much easier to say that. Instead, I’m a bit at a loss for words. There isn’t a specific thing about it that I didn’t like, except the lack of deep characterization. It just didn’t speak to me and the things I like to see in films. I also like, but am not an avid fan, of Star Wars.

So if you want to see Rogue One, go forth and spend your money in happiness. If not, that’s okay, too. If you like it great, if not, great. It’s the season of spreading joy and cheer, and the last thing we need is to get in debates whether this movie is good or not.

We’ll save that argument for some 2017 movies.