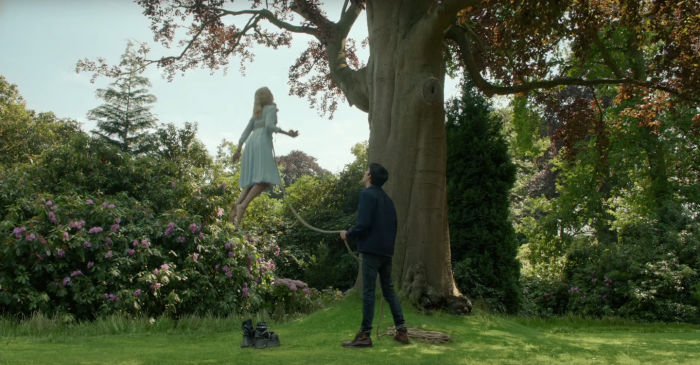 You know if you have a movie grandpa, you’re going on an adventure. He’ll read you a book when you’re sick. He might take you to a dinosaur playground. Maybe he’ll help you get a golden ticket. Or, in this case, he’ll send you on a journey to go defend a home run by a bird lady that houses children with odd and often useless powers who live in a time loop during World War II on a deserted island off the coast of Wales.

What, your grandpa hasn’t done that?

Miss Peregrine’s Home For Peculiar Children, directed by Tim Burton, is based on a book of the same name by Ransom Riggs. The film starts just as said above. Teenager Jake (Asa Butterfield) suffers a tragedy related to his grandpa that sends him with his clueless dad to find an old orphanage that his grandpa claims to have lived in when he was younger. Jake finds it, meeting Miss Peregrine (Eva Green) and her charges. There’s Emma who controls air, Olive who controls fire, the twins with immeasurable strength, an invisible boy, a girl who can grow things, and the boy who has… bees in him? But this paradise for these peculiars is threatened when Barron (Samuel L. Jackson) hatches a plot for capturing Miss Peregrine. Luckily, only Jake can stop him.

The film starts off rocky, getting through the exposition and the setup simultaneously as quickly and as drudgingly boring as possible. When Jake actually gets to the home, things start to become steadier. Jake starts to explore the world of Miss Peregrine, and the audience does too. We’re right along with Jake. What’s behind this door? What just darted around the corner? How did that happen? It’s magical, and it is how the movie should have continued.

But then the plot kicks in. The movie lost me about 3/5th’s of the way through, during a “climactic” battle between (and I swear this is true) the skeleton ghosts from The Lord of the Rings, some invisible monsters covered in cotton candy, and some World War II X-men children- on a carnival boardwalk, with some DJ Khaled beats in the background. At this point, it’s not weird. It’s not peculiar. It’s not even likably bizarre. It’s ridiculous, in an unprofessional, uninspired sense. How many movies have we seen in recent years that include faceless, vague, monster enemies? Oh I can name a few. (Deep breath) Suicide Squad, Ghostbusters, Batman V. Superman… and those are just the ones in the past year that I’ve reviewed on this site.

I am so sick of these endings. I want compelling villains with motivations. I want villains who, if they create an army, they create an army where I know the weaknesses and strengths of these creatures. Stop making faceless things to destroy. Give me people to root for on both sides. Give me an understanding of the hero’s plan so I’m not just watching them fumble around, trying to accomplish something I don’t get. No more CGI murderfest to simply garner a PG-13 rating. We’re so desensitized to violence, it doesn’t even register. Make an ending count, not just something that has to be checked off the list. I can’t take this anymore!

PS: If you need someone to direct your upcoming live action Mulan, I am available.

Before you despair about Miss Peregrine, there are things to like. There are original notes in this movie. The special effects are well done and the atmospheric cinematography is gorgeous (see photo above). Asa Butterfield has also grown up well. While he doesn’t have quite the charisma his contemporaries (like Dylan O’Brien or Ansel Elgort for example) have for a leading man, Asa still has a distinguished quality that made me wish he had more to do in this film. Same with Eva Green. Her Miss Peregrine is so interesting and makes such a strong impression, it was a shame that her role also was very limited.

Now, big casts are hard. I don’t expect each character to have strong development. But even in giving each character one short scene (which the film does) you can still portray personality. None of the characters, save for Miss Peregrine and maybe Jake, get any. In the beginning of the film, Jake and Emma meet each other, and three minutes later every character is expecting them to get together. Because they have little to no personality or endearing qualities, I have no idea why they are attracted to each other. Watching them kiss is as interesting as smushing two pieces of blank copy paper together.

If there is a positive for this large, boring cast, it is that there are a ton of female characters! Choose any boring person you’d like to relate to. You’ll probably find one! Unless you’re a person of color, then you only have Samuel L. Jackson’s eye-eating villain. Take that as you will.

Speaking of Samuel L. Jackson… I don’t know if Sam Jackson took a bet, or was auditioning to replace Jared Leto as the Joker, but he is absolutely terrible in his role. I don’t understand (like with so much in this film) what Burton was going for. Whimsical? Scary? Edgy? Bizarre? Stupid? A puke-colored mixture of all of that?  If that was his goal, I guess Samuel L. was perfect.

I saw this film with a friend who had read the books, and her perspective was a conflicted one. She overall liked the film, but was puzzled at some of the changes. She assured me that the techno-monster-skeleton-carnival fight did not happen in the book. Another friend who had read the book but didn’t see the movie with me said that the book is written in a very film-friendly way. It doesn’t need a bunch of changes. Which makes me wonder, if you have a perfectly good book, that already hits the right tone between eerie and whimsical, and you put it with a director known for the same thing, how does this mess occur?

I have a few ideas. Lately, it has become clear that Tim Burton is becoming more of a parody of himself than the filmmaker he once was. While I liked his last film, Big Eyes, it was a significant departure from his style and the type of movie this is. The last movie that he did that was in this genre was Alice in Wonderland (2010). That movie was bland, this movie is silly. Maybe he was just uninspired and thought doing what he always does would work this time. It didn’t.

It could be that the source material really was challenging. If nothing else, Burton could have made it more of an “inspired by” the book than an adaptation. Take the elements you like, disregard the ones you don’t. Or, maybe it’s just a matter of not having a clear vision for the film. The mood goes from frighteningly dark, to hilariously campy, to whimsically silly, to outright incomprehensible.

In the end, when the opening credits are the best part of the movie, you might want to rethink your vision.