From the very beginning, people had their doubts about Batman v Superman: Dawn of Justice.

The title is too long!

I hated Man of Steel!

They just want to make money!

After the trailers came out, very few people were comforted.

They showed too much!

And now the event of the century has come. Two of the biggest American icons fighting. But to add to the doubts, turns out Batman v Superman has its work cut out for it, seeing as it’s not the only superhero movie about a genius billionaire vigilante asking for accountability against the boy-scout of the people with superhuman abilities (Civil War, anyone?).

Batman v Superman is set up, at least in its first act, as an essay of sorts. The claim: Superman and Batman must fight to decide who is a true hero. Evidence is first about Superman. We see the controversial fight in Metropolis from Man of Steel from the perspective of Bruce Wayne. We see the people dying, orphaned, losing everything. Bruce watches this all. His anger is justified. Then we see the next set of evidence. Batman has his own reign of terror, so much so that the people he saves fear him. He brands villains, kills easily, and calls himself a criminal. Then we go back to Clark Kent, who is just a confused young man trying to decide whether he wants to keep his calling to be a god. Then we go back to Bruce Wayne. He’s lost the people he cares about. He’s tired. He just wants to leave behind a legacy. And he finds that in Superman. His legacy could not be just getting rid of criminals, whom, he argues, are like weeds: they keep coming back. But to take down Superman? The god? That is something permanent. As for Superman though, the Batman is a threat to justice, working outside the law. Not that Superman can say much to that. He himself has gone outside the law to save Lois Lane, even destroying a village in the process.

But Batman isn’t the only person out to kill Superman, and that’s where the second act begins. A wrench gets thrown in. Lex Luthor. 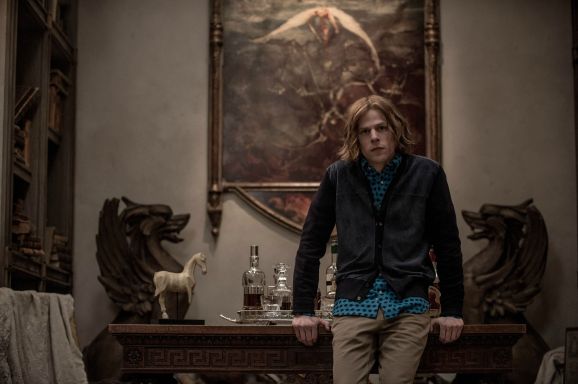 This is a complicated plot, with various other ones I haven’t even touched on thrown in. There is at least one side plot that could have been eliminated without hurting the story, world-building, or characters. Then, if you wanted to get rid of the DC Cinematic Universe building there goes another three side plots. And if you wanted to rid of the half-Man of Steel sequel, and the beginning Batman movie, you have only one story left- the actual fight.

I have a lot of respect for the movie for trying to fit that many stories into one film. Some of it works and fits together. I like that they took their mistakes from Man of Steel and confronted them, basically making a movie out of it. Later in the film they completely remake those same mistakes, but hey, effort.

As for the building of the DC cinematic universe, it doesn’t succeed in getting me excited. (Never mind the fact that this world-building is so comic-book based to the point that I had to look up what certain symbols meant and who certain characters were.) Warner Bros is rushing it, to replicate what Marvel took years to do. I think they should focus on hitting each beat. They don’t need to have a two part epic, they don’t need solo films for a dozen characters in between. That will come. If the DC movies don’t want to be compared to Marvel, they shouldn’t be following them so closely.

But since I can’t blame them for wanting to replicate a design that has made billions of dollars and fan love worldwide, we need to deal with the movie we have. One that is messy, brilliant at times, but overall very….

Empty. It’s a movie that has an elaborate, beautiful, seemingly intelligent cover. But when you dig down, it’s very empty. The world-building is there, but the world still feels dark and soulless. The cinematography is gorgeous but there is nothing on screen that hits me emotionally. The characters, while well-acted, don’t relate to me. I don’t understand Superman’s pain because it is so far removed. I don’t have Batman’s anger, because I didn’t know the people who died. The talk of gods and monsters are never resolved. We never get an answer if Superman is a god or not. And while that might spark debate, it seems more like lazy writing. Pseudo-intellectualism.

Much of that talk comes from Lex Luthor (Jesse Eisenberg.) He was a controversial pick from the start. People have criticized his performance for being too much like his performance as Mark Zuckerberg from The Social Network, or an imitation of Heath Ledger from The Dark Knight. This might have some truth in it. But I’d much rather see a film take a risk, try something new and reinterpret the character than just make another reincarnation of it. A reboot needs things to redo. So I enjoyed Jesse Eisenberg’s take on it. His eccentricity made sense. A man who is able to convince two superheroes to fight each other, orchestrate a bombing at a State Senate, and kidnap various people needs to be on the crazy side.

Ben Affleck is a very good Batman, and an even better Bruce Wayne. This Batman is more murderous than any incarnation before, but it doesn’t seem out of place in this universe. And his Bruce Wayne is more proactive and exciting than Christian Bale’s before him. Jeremy Irons as Alfred is good too, but has very little to do.

Henry Cavill as Superman has all the tools to be a great Superman and Clark Kent. This is an interesting Superman. Not a boy scout but a torn young man wrestling with his powers. His relationships with his mom, ghost of his dad, Lois, Perry White, and Batman are very defined. Once he comes back (he’s confirmed for Justice League) I hope to see even more development for him.

Amy Adams tries extremely hard to make Lois Lane a great character. She has more to do here than in Man of Steel. But, she is still being used as a plot device and grows very little as a character.

Wonder Woman was one of the biggest wild cards in the movie. While she doesn’t get a whole lot of screen time, she makes a very good impression. Gal Gadot makes Diana Prince relatable, (she checks her email! Just like us!) and Wonder Woman’s entrance is fantastic. Her theme song is an electric guitar solo for heaven’s sake! (the whole score by Hans Zimmer and Junkie XL is fantastic) I’m very excited for her upcoming movie. As long as they make it a point to sell the movies to men and women, not just making her “the female superhero,” it should be a great start to hopefully a new wave of more diverse superhero movies.

There are some other good things about the film. The actual fight between Batman and Superman is chillingly dark. Watching Batman completely brutalize Superman, the way he was brutalized by Bane in The Dark Knight Rises, had me cringing, sitting on the edge of my seat. Especially because, for the first and last time in the movie, I was emotionally invested. I cared that Martha Kent was saved.

Now in a perfect world, the movie would have ended there. I really liked the connection between Martha Kent and Martha Wayne, I had never made that connection before. There is some really good writing. Holly Hunter takes a throwaway role and makes it great. The bombing of the Senate scene was breathtaking. But since it is not a perfect world and not a perfect movie, it keeps going.

Now I understand movies feel the need to get bigger and better. But when your bigger and better is a slug monster that looks like a cross between The Abomination and a Cave Troll, a fairly generic fight isn’t the ending we needed.

The true problem of Batman v Superman is that it is a wanna-be prestige picture that is the geekiest (and I mean that in the most endearing way, my fellow nerds) comic book movie that has ever been on screen. You have to know these storylines, characters, vague references, and symbolism from the comics to understand a lot of what is going on, because unlike other cinematic universes like Marvel, there is only one other movie to give you any background. At the same time, you have to have an appetite for a lot of often empty talk about gods, monsters, men, and the meaning of life. A lot of people can do both. This movie however, cannot. This leaves us with a movie that wants to be a lot of things, and while it succeeds at a lot, utilizing everything off its bucket list, it never fully resonates with the audience. At least, the audience who is still on the fringes of whether they want to get into this world at all.

One thought on “BATMAN V SUPERMAN: DAWN OF JUSTICE”